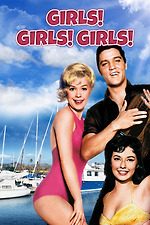 I’m a sucker for Elvis movies. He’s one of my two favorite musicians, and I usually find his movies to be a lot of fun, even while many are far from objectively good. Elvis Presley isn’t a great actor, but he has a certain charm about him on screen. His comic timing is usually good, he’s far better in fight scenes than most actors in the early ’60s, and of course, he knocks the musical scenes out of the park.
Yeah, the music isn’t the most inspired in terms of the songwriting. Most of Elvis’s best songs don’t come from his movies, though there are some strong exceptions to this. In this movie, though, none of his songs are that great, while “Return to Sender” was a big hit, and I do enjoy it.

And his performance of it is pretty great.
The plot is definitely very formulaic. If you’ve seen one Elvis movie, you’ll probably feel like you’ve seen this one. Still, Elvis’s charm makes it watchable.