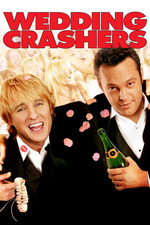 Wedding Crashers is a lot of fun due to the chemistry between Wilson and Vaughn, and it almost becomes more. There is a brief montage scene towards the end that is darkly humorous and beautifully depressing, but that's sort of thrown out a few minutes later.

This film is still very, very funny, but to me it's also a little disappointing. I usually like my comedy with a little more drama in it, but that's just me.