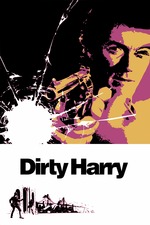 For all of the movies that came in the wake of this behemoth, even if they got some of the chops down, like say the low-angle hero shots, the hate speech, the weapons fetish, or the fascist politics, the majority lack its strong, often genuinely witty, coherent script (I'm looking at you BAD BOYS II). Fascist, though it may be, it has snappy dialogue and an economic story that seems episodic at first until you realize it has all been in service of developing the central character and building his world. Don Siegel, though, good God... that shocking helicopter-away shot when Harry's torturing Scorpio in the football stadium... Clint Eastwood's stance as he stands on the overpass waiting for the school bus to drive under, the same image appearing in the following shot as a reflection on the school bus windshield... Clearly not an accident that this movie or this character are iconic. Gets better every time I watch it.