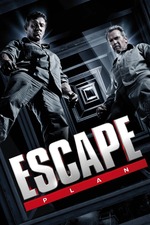 Smarter than I thought it was going to be, but not as clever as the screenwriter probably thinks it is, Escape Plan is an entertaining violent popcorn action movie with one good surprise in the middle and a really obvious one at the end - so obvious the movie calls it out, much to their credit.

There are implausibilities here, to be sure. But nothing that goes so far out or strays out of the sandbox they set up to sink the movie. Play along and you can have a good time seeing Stallone and Schwarzenegger not acting their age together in an action movie. I liked them both in this and thought this was a good movie for them to do together. Jim Caviezel, Amy Ryan, and Vinnie Jones add a lot to the proceedings. And Curtis "50 Cent" Jackson was good in his small role, too.

I could have used a few more heroic scenes for the two protagonists, but otherwise this is pretty much what I want when I see a movie from these two guys: A movie where they face a seemingly inescapable scenario, up against insurmountable odds and/or a formidable foe and them finding a way to come out of it alive.

A solid entry for each of their filmographies, especially this late in the game.

Tinker Bell and the Pirate Fairy