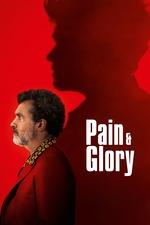 Almodovar shows tremendous restraint in Pain and Glory. His debilitating ailments that restrict his creativity and prevent him from fulfilling the one part of his life that fuels his spirit: filmmaking, is put into question. An examination of the driving focus of a person who's dedicated his life to his work and the self-doubt that comes with being out of work and the fear of never being able to return. A most personal film delivered so truthfully though Antonio Banderas (Salvador) concerned & confused portrayal of Almodovar himself.

In a story written by Almodovar while sidelined by the back surgeries performed in the film itself, he wrote Pain and Glory. It's still the same sharp, ultra-clean Almodovar experience but with quite possibly his deepest dive into character and what comes to the surface is unbelievably authentic. Vulnerability is always key in his films, but here that vulnerability is channelled throughout his entire life and the efforts to which he hides it from the world. It's a cynical view on the forefront but peeled back to reveal a revival with one's senses leading to one of the most perfect endings imaginable.

For Banderas, he had to dig extra deep to pull out these hidden homosexual feelings amd the narcissism that prevents him from accepting love. Almodovar writes himself as cynical and authentic as possible in almost a cathartic example of coming to terms with one's art. Banderas reflects that angst in a subtle portrayal of life-altering pain. He gets the struggle of wanting to work but not being able to. We see that in Banderas expressions. His shame as a drug addict. It's all-encompassing performance that is also underhandedly funny and deranged. Undoubtedly Antonio Banderas at his absolute best.

It's the autobiographical structure covering his life as a poor child to his current state. The flashback scenes are given equally, if not greater attention and do a great job fitting into his current affairs. The writing is all connected, making the brisk pace of the editing feel invisible despite drastic changes in tone and characters. The subdued Salvador juxtaposes his fiery mother, who plays a significant role in his entire life. Penelope Cruz as Salvador's mother is an excellent cast and her being back with Almodovar is always a treat. I love two dueling figures throughout time. He writes so fondly of her while pointing out the human truth about her faults. It's all genuinely true character writing.

It's certainly one of Almodovar's best films while indulging himself. It's calculated with truly excellent production design that has helped define Pedro's existential message. In Pain and Glory, it adds a great deal of visual stimulation and conveys a deeper understanding of his head space. I loved his restraint, basing the film solely in reality and not overwriting his protagonist and supporting actresses like the other films he's made. Unique editing, cinematography, and score with Banderas taking it to another level.
Rating: 87