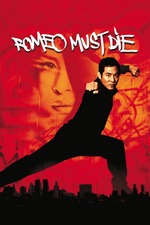 “Your dad is running around here like Donald Trump.” -DMX

Man, LB sure does hate this hip hop/Kung fu hybrid. I thought it was a real hoot tho. Tonally, it’s fuckin’ goofy as shit, bouncing back and forth between “serious” action drama and and straight-up silly comedy. I guess it’s supposed to mirror Romeo and Juliet, but it’s way more racist, and way way less romantic.

Let’s talk some technical stuff: There’s an absurd amount of awful wire work done throughout, most of the time to hilarious physics-defying effect. Most of the music is made up of beats by Timberland, but at least one action is scored with a song that sounds like the Macarena. There are a lot of explosions, including one that emanates from USPS box that looks amazing.  Speaking of effects, there are also some random CGI inserts of x-rayed skeleton bones cracking that sometimes appear during fights to illustrate what is happening on the inside of the characters.

For all of the insanely comedic action set-pieces, there are at least a handful of great ones, including a sequence where Jet Li uses someone else’s body to fight someone else (Weekend At Bernie’s-style). Not to mention Jet Li has a fight with Anthony Anderson.  Also, there’s no one in the movie named Romeo.