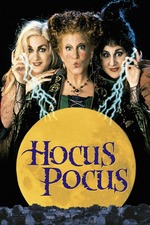 My friends have always yelled at me because I've never seen this. When I was younger I only ever watched the Halloweentown franchise and because I was so in love with those films I never gave Hocus Pocus or the Twitches films a chance. I really regret that because this film would be so much more magically if I had watched it as a child. That being said, I still found this pretty great. It's really funny, has held up extremely well, and has fantastic performances (Sarah Jessica Parker being the standout for me—I had no idea that she was in this until after it started)