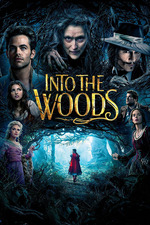 Sondheim's lyrics are pretty astounding- very wordy, clever and easily the highlight of the whole film. The music, as a whole, is pretty solid, though only one song ("On the Steps of the Palace") truly stands out.

As with Chicago and, to a far lesser extent, Nine, the whole cast is pretty great. Meryl Streep is, obviously, phenomenal here, and I really liked Kendrick, Blunt, Corden, Pine, and Christine Baranski in a very small role. The story is a cool twist on the "be careful what you wish for" adage, with an unusually bleak second half. The story is a bit scatterbrained (Rapunzel & her prince are largely unnecessary), but it moves at a nice pace.

I believe that Chicago is the great movie musical of all time, and I don't think Marshall (or any director) will come close to topping it anytime soon. Into the Woods, for all its impressive sets and costumes, feels very minor in the grand scheme of things. In the day or so since I've seen it, it's already begun to leave my brain. But I greatly enjoyed it as I saw it, and the soundtrack is very solid.

Also, Anna Kendrick's singing voice is worthy of an Oscar.