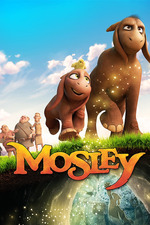 A wildly creative story that strays from the typical formula so much that you can never truly predict what's coming, 'Mosley' is a criminally underrated film in the field of animation that deserves a lot more recognition.

This easily was the most surprising animated film that I've come across all year, and I feel as though that is largely in part due to just how obscure this is. Despite a rather hefty budget, this movie is very difficult to come across and I was very glad to have gotten a chance to see it on the big screen. I was absolutely shocked to realise just how great of a film this managed to be, and it was so baffling that such a great work of art has been left under the radar. What makes this film so special is that none of it feels like it was manufactured underneath a cynical marketing committee when I see a story like this I genuinely believe it was the product of people who really wanted to tell a captivating story and had the free range to do it. I love how creative the premise is and the fact that the movie was willing to go into much darker territory made the overall experience even more impactful, I never expected myself to tear up during this film but that shows just how much it is capable of being such an emotional powerhouse of an experience.

The film is thrilling largely in part due to how unpredictable it is, any kind of cliche that has given the medium of animation a bad name is cleverly avoided here, whenever I was expecting this movie to tread predictable territory it always managed to subvert my expectations and deliver something so much more invigorating and original. This easily has to be one of the most creative stories I've seen out of an animated film and it goes in directions that one would never even expect. The more it develops on this world, the more it hooks you in- And it never feels tiresome or drawn out in the slightest, because each thing that gets introduced only helps to elevate the story even higher. I really do like that despite it being a family-friendly film, it wasn't afraid to tread down more disturbing territory, not going to spoil anything here but it has a lot of themes regarding domestication and it is handled in such a mature way, there is a reason why these creatures are shaped in this manner and it helps to say a lot about our own world without it coming across as needlessly preachy or blatant.

Each of the main characters that you follow are extremely likeable and you wind up building more and more of a connection with them as they go on. The humour in this is also expertly handled, there isn't any instance of comedy that's slapstick or a one-off joke, for the most part, a lot of the humour is based off the relationship these characters have with one another. It isn't a simple punchline, it helps you get to know these people better and that kind of clever writing is what allows you to get a lot more attached to these characters than otherwise. The story has a fantastical element to it but it never goes so far to the extent that none of it feels grounded in reality, there are spirits and curses but the creatures are never portrayed as magical beings. They're able to communicate with humans, but there aren't any specialities that they have to combat their life of servitude and they wind up being so much more vulnerable as a result. It isn't like 'Abominable' where every conflict is saved by a creature because of random magical powers, this species of thoriphants are clearly stated to be fragile and in serious danger. And that is most clearly shown during a truly intense third-act climax.

One of the things that really makes this film a lot more different than other animated films is just how 'Mosley' starts its own adventure. From the moment the conflict first starts it is abundantly clear that this film is trying to go for something a whole lot more intense and exhilarating. The moment in which Mosley is at the point of no return is easy when the film goes from 'alright' to truly exciting, and as soon as you believe that he can just walk through the caves to get to where he wants, the movie completely shifts your expectations and suddenly you have no idea where the film's going to go or how Mosley will get out of this situation alive. It is such a rush to see a movie where the main character is constantly on the run in fear of getting trapped, and the fact that the antagonist is wanting to hunt down and kill the main character gives more of a reason to hope he makes it through his destination alright. He has no idea where to go and almost every moment feels like a life and death situation, there's a truly amazing shot where he's trying to hold onto the end of a ledge only to show that his hooves are futile at getting any sort of grip.

I really love when they touch on those aspects in particular, one disturbing aspect about the movie is that these creatures have become so domesticated that they become borderline deformed in order to better fit the role of slaves. It's a very dark film at points and I'm glad that the film is willing to go a lot deeper than a typical kids movie would. The fact that these intelligent beings have slowly over time become bred to act more like low-life creatures is a concept that was really ballsy for such a movie, and there are several moments that really do feel like a subtle allegory of the Atlantic Slave Trade. Just that one moment of this creature telling his master to not plough a certain field makes the others say things like "Aw, are you going to listen to your slave now?" really proved to me just how poignant and delightfully clever this movie is. The animation is also surprisingly on point, these designs for the thoriphants very well could've translated poorly in CGI but they do such a great job of making every character feel expressive and full of life. The environments are beautiful and it never comes across as stale of repetitive, it doesn't have the same kind of polish as the bigger animation companies but this is genuinely fantastic for an animated debut.

Not only is the animation surprisingly great, but the soundtrack also does a magnificent job; there aren't many musical scores that I can really find 'distinct' in many animated movies but the melodies found here really stuck out to me and helped to make a particular impact during the film's most emotional scenes. You really do develop a connection with these characters and when things are at their most intense, you can feel it. The final act of this movie is truly a thrilling conclusion and I was emotionally wrapped up in all of it. If there were any problems I did personally have, I'd say that the obese Southern character didn't really do much at all to engage me, his thick accent alongside a design that felt a little too cartoonish didn't feel in place with a movie that took itself so seriously. When the stakes were this dire, his inclusion in some of those scenes did kind of lessen the impact. I will also admit that there were perhaps a few too many scenes that showed Mosley's wife and child back at home, although there are little tidbits that help progress the plot forward those scenes did feel like they were filling up a little too much time that could've been focused on the pain plot. Mosley's child trying to gain a sense of independence during his dad's absence was cute, but I do feel as though a lot of those scenes could've been cut down substantially.

But god damn, if there was any character that truly left a mark it was probably the antagonist of the film. In an era where most animated films heavily rely on a worn-down trope of 'twist villains,' this movie leaves such an impact by including a hunter that you know absolutely nothing about. He's mysterious, he's deadly, and you don't need to know a single thing about him in order for him to establish a dangerous presence. In fact, the fact that barely anyone knows about him is what makes him so much more memorable. But I mean, what more can I say? This film is original, it's incredibly creative and unique, it gives you an expectation of where the movie's going to go and instead goes to places one would never expect. The characters are incredibly likeable, the antagonist is genuinely intimidating, the animation is truly spectacular as well as the soundtrack, it's able to subvert your expectations and is bold enough to get darker and more gripping. It's an absolute thrill-ride that really left me tearing up in the emotional highs of the climax, and that's not something you can often do when it comes to animated films. None of this feels like it was made by a sleazy business executive, it completely feels like the artistic vision of one person and I find that to be really special. I thought this was pretty damn great overall, and I'm really thankful to have discovered it. Hopefully, this gets more attention in the future, and I'm fully grateful to include it in my catalogue of truly great obscure movies. I hope you guys like it too because I give it my utmost recommendation and perhaps you'll do the same. I was so pleased with this movie, and for that, I'm giving 'Mosley' a 7/10.