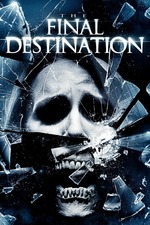 Four sodas and four pretzels at a nascar race? Thats gotta be at least $60-$70. The mom who makes a joke out of putting tampons in her kids ears should get a mom award.
The speed of cars can unscrew bolts in this world. Lmfao, talk about shoddy workmanship.
Clearly they learned their lesson with the last films inciting incident being real tame. Gore galore here. A lot of it was shot for 3D which is a shame cuz its all shit flying at the camera.
"Thats a lof of tampons for one woman" Dude, its a whole four tampons. Have you ever seen a womans bathroom or purse?
*Death by tire to the head 6/10 clearly meant for 3D, but i like the real prop they linger on.
Opening credits rule. Xrays of previous movie deaths
"I'm not a hero, I'm just speaking the truth
I'm not a hero, don't call me a hero
(Beer, hoagie, sweatpants, not gay)
Yeah, not a hero (titties, not gay)"

*Death by immolation 4/10 too quick and ends in an explosion.

Aw man, now I want a pedicure and hair cut. Im in the Farrah Faucet stage.

The hair cutting scene is fairly tense, with close ups of the scissors by the eyes and throat. What a bad hair salon though. OSHA needs to pay them a visit.

*Death by rock in the eye 3/10. Unimaginative and relatively ungorey considering the close up. The kids are bad enough actors that they totally telegraph it before happens.

*Death by squeezed through a grate 8/10. Fun and gory and never gets old. Other great examples include Alien Resurrection and Jason X.

A custom sun roof? I mean i guess, but id see that more in like a porsche, but a toyota or whatever shes driving.

*Death by pool drain 7/10. We only see the blood and organs come out of the pump, but still brutal for the imagination, and based on a real death.

Its a neat idea that suicide doesnt work if its not your turn.
I like that this dude packs climbing gear to go to Amsterdam. Id be packing my bong (jk TSA would take it away)

In a coma? thats ok, just drip some water on your face.

*Death by explosion and nails to the face 0/10. You did this is both a previous movie and this one.

*Death by escalator 2/10 blood wouldnt come out of her mouth from a leg wound. American Dad! did it way better

So wait, does he have the premonitions or does she?

This movie wastes absolutely no time getting to the deaths and as the fourth installment i respect that.