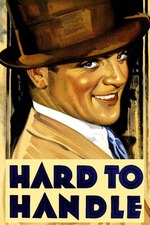 Maybe I'm not too reliable on the pre-Code 30s (probably my favourite period for American cinema), and I love all the Cagneys I've seen from 1931-33 - except maybe Lady Killer, which is merely hilarious - but he's perfect here as a small-time arch-capitalist battling the Depression with one get-rich-quick scheme after another: a man of few redeeming features - best of all: he does in fact sleep with the vamp, even while insisting to his fiancée that 'I'm as innocent as a child!' - except that everyone around him is also out to scam everybody else, from promoters to society matrons to tailors to 'respectable' businessmen to prospective mothers-in-law (Ruth Donnelly matches our hero wisecrack for wisecrack). Funny, fresh and breathlessly made - several scenes abbreviated to a succession of quick wipes - but it's more than cynical demotic comedy: the speed with which fortunes change, coupled with the uninhibited style, dialogue so fast it's impossible to catch every line, view of a world where money is everything, culture a joke and morality a smokescreen, all conspire to create a kind of blithe anarchy comparable only to the Marx Brothers (the college scene echoes Horse Feathers, esp. the preference for football over academia), in turn reflecting the growing pains of American capitalism, the desperate energy of a system trying to fight its way back from the brink, the free-for-all before the corporations moved in, take your pick. Exhilarating.