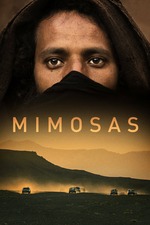 Feels like Meek's Cutoff, then gradually reveals itself as more Holy Motors - only even more perversely puzzling than that implies (who is this devout first-timer? is he ultimately angel or devil?), and more visually spectacular. An old man calls down and three tiny figures in the vast snowbank below begin to stir, shouting "God is great" (just as well the precise religious connotations remain vague, given Muslim sensibilities). A fleet of taxis - like the limos in Motors - drives away into the desert, clouds of dust at twilight. "Those two birds..." says our hero - though no birds have previously been mentioned - indicating two grey shapes high on a rocky bluff, and the crazy first-timer (angel? devil?) responds with a raised-hands-and-sidestep gesture that only makes sense in his own private world. Wilfully strange.