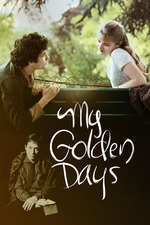 Desplechin tries a hackneyed genre, the coming-of-age reminiscence, and makes it his own. The filmmaking seems to be instinctive - see e.g. the flurry of mismatched angles during Paul and Esther's first meeting, somehow reflecting their surging hormones - the characters ruled by a singular mix of self-awareness (Esther admitting she always has that effect on boys) and fevered OTT impulsiveness; their feelings seem to be too big for them, like middle-aged Paul still erupting - though he surely knows it's stupid, though indeed he doesn't consciously feel anything - at the memory of teenage betrayal. Not sure who decided on the English title but the French one seems better, if only in emphasising the role of all three youthful memories: Paul is subconsciously ruled by his childhood - he gravitates to unstable women, like Esther and his mom, and seeks comfort in elderly eccentrics like the African prof and his great-aunt - while the Russian interlude creates his 'double', the dead Paul in Australia like the dead boy in his memories, standing for his lifelong insecurity about his identity (the way he succeeds is often by putting himself down, insisting that Esther's other suitors or the prof's other students are far more competent; it's like he needs to destroy himself). "I love you only with lightness, yet I'm so heavy," he says, and Desplechin's approach to these young people is like Assayas' in Cold Water, light on the surface but aware of the cumulative weight of their playful skirmishes; if anything, Assayas went for grandiosity whereas this has a disenchanted streak, as if to say the past leads to nothing and teaches us nothing - yet we still can't escape it. A lovely movie.

All Quiet on the Western Front