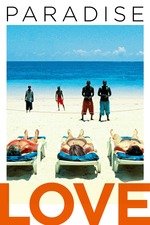 Second viewing. Wasn't really planning to add more comments - but just a few SPOILER-laden notes to support (what seems to be) my minority opinion that it's one of the best films of the year:

1. The balance in this film is superb, best I've seen since Raja 10 years ago. Both sides exploit each other, and it's impossible to make any firm moral judgment. Teresa clearly exploits the Africans but in fact she's the sucker, not they. Hence e.g. the bit where she asks the man if he's going to have a problem being seen on the street with her - and he, surprised, replies that of course not, people will just assume she's got money. He tells her in so many words, yet she's still in denial! The whole town is geared to milking her, and she doesn't even realise.

2. The reason she doesn't realise is because she's a romantic. (Also because she's crying out for love, but I think the two are connected.) The film deliberately uses its freakshow aspects - very much including Teresa's huge, ugly body - to disguise that fact, but it's inescapable: beneath the flab of this cackling, obese matron beats the heart of a lovelorn girl. She just doesn't see that she's being peddled a fantasy. (Her friends, we assume, don't have this problem.) She just doesn't see that the whole edifice runs on money.

3. Whose fault is that? On the one hand, the Africans assure her that they love her, on the other she'd have to be terribly naive (or desperate) to believe them. On the one hand, it seems very sneaky that they ask for money later, (allegedly) for schools and sick relatives, on the other it seems very clear that they do it this way to preserve her dignity. The alternative, after all, would be to ask for money after sex - and that would make her look like a woman being serviced by prostitutes.

4. In short, the whole fiction of Love (like the fiction of an African Paradise, "hakuna matata" and so on) is a kindness done for Teresa's benefit, which she totally misunderstands (why? because she's lonely - but also because she reflexively considers herself a Westerner among 'simple' Africans). Her reaction to seeing the first lover with his (real) girlfriend is the reaction of a Woman Scorned - yet it's part of the film's power that I, at least, cheered her on when she slapped him down, even though her reaction is completely irrational (she hasn't been 'betrayed'; there was never a love affair). That's why the second man is necessary, to expose the emptiness of her grand gesture - then comes the stripper (who, not being a prostitute, has no need to get hard), a confirmation that everyone in this Paradise is a performer acting out a specific role, then, finally, comes Teresa's last-ditch attempt to assert control with little Josphat, who brings her back without meaning to ("You not old," he insists with automatic politeness) to what she should've known all along, the reality of her huge, ugly body: She's grotesque. No young man would screw her unless that was his job. All the things we've known from the start - yet Seidl manages to make us wonder if maybe, just maybe there's a slim possibility of real love. Why? Because that's what being a romantic means - seeing a slim possibility of love even when all logic, experience, and indeed all the evidence of one's own eyes points to the opposite.

I've found this film heartbreaking twice now, so I guess I must be a romantic. I'm okay with that.