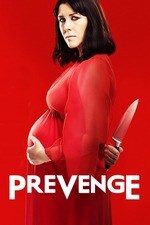 The cutting of a cord births a plan, just like the cutting of a cord births a baby. Might've been the feminist Theatre of Blood (but two of the victims are women), might've been the comedy I Spit on Your Grave but the (p)revenge isn't actually prompted by rape. Call it Grumpy Pregnant Lady: The Movie, a bit repetitive and too self-consciously midnight movie-ish (fortunately, I watched it at midnight), but it keeps hitting all kinds of notes - zany, rueful, angry - and hits them smartly. "Children are so spoiled these days. Mummy, I want a Playstation, mummy I want you to kill that man..."