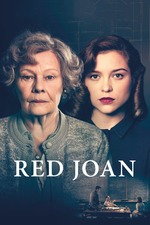 Based-on-fact sludge about a British granny who's accused of having been a Soviet spy back in the day - but it turns out her motives were pure, having sought to "share" top-secret research post-atomic-bomb in the hope that nuclear war could be averted if all sides had the same information. Inert but respectable enough for a while - then increasingly silly as emotional layers get peeled off, culminating in the big confession scene which goes as follows:

Hard to imagine that line being played with a straight face, on the other hand it could make quite a useful life hack, in fact I reckon saying "Hiroshima..." could be my go-to excuse whenever I screw up from now on. ('Why did you get white tuna when you know I asked for pink?' 'Hiroshima...') Also a film where the heroine - a woman in a pre-feminist world - is pressured to betray her country by gays and Jews, possibly equating treason with her own status as a member of an oppressed group. But I'm not touching that one.

My Night at Maud's