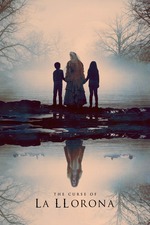 The Curse of La Llorona

These Conjuring-universe movies are getting shoddier and shoddier. Here are 5 things that made me giggle when I should've been terrified instead:
1. La Llorona in the prologue, drowning her two kids in a shallow stream (she holds them down, and holds their heads under water) - then so overcome with remorse when she realises what she's done that "she threw herself into the same waters". Really, threw herself in that same shallow stream? Hope she didn't bump her forehead.
2. The family taking obliviousness to a whole new level, getting on with their lives - a little shaken, sure, but going to bed and denying that anything's amiss - even after all three of them have (separately) come face-to-face with the ghost, and indeed been attacked by her. Some people can't take a hint imo.
3. A priest explaining why he doesn't mind people believing in ghosts and other old wives' tales (and incidentally why the horror genre, historically seen as transgressive, can so easily be co-opted by conservative forces): "If they believe in that... [turns around, points to the inside of the church], then surely they believe in this!". True.
4. The lapsed priest/shaman fighting the ghost with a line of magical seeds from the fire trees which once looked down on La Llorona (and still wield power over her), ceremoniously placing a line of seeds behind the front door of the house, right on the threshold. As long as this line remains intact, he proclaims with authority, "she cannot enter!" - but the ghost knows something that everyone else has forgotten, viz. that houses have two doors, and promptly comes in... through the back door!!! You should probably have seen that one coming, Mr. Shaman.
5. Give it up, however, for the greatest shaman-in-the-suburbs line of all time: "Your pool is now filled with holy water!".