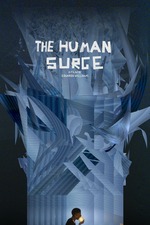 Sounds like a case of the five obstructions: do a globe-trotting riff on Slacker BUT follow the subjects with nausea-inducing shakiness, use only available light so some of it is illegible, don't set anything up so passers-by keep turning or acknowledging the camera, and, once the characters stop, linger along with them to the point of enervation. Heavy going but increasingly magical, especially as locations get shabbier and increasingly (then completely) rural, culminating in an Apichatpong-like interlude in a swimming hole where talk loses shape and the silence hovers on the fringes. In the future, silence will sound like a crowded food court, says someone (i.e. hubbub will be so normal it won't even be noticed) - or maybe we'll just be watching screens in darkened rooms and posing for webcams in between crappy jobs, and maybe the human surge is the electronic surge of all our phones and computers, or indeed the surge of human piss that leads, in the film's finest twist, to a Lynchian dimension that confirms its interest as (yes) entomological. Not actually judgmental, a wise child noting late on that our hearts are the first thing to form in the womb, then our tongues - i.e. the urge to communicate is second only to life itself - just deliberately flawed and withholding, aimed at provoking impatience then a glimmer of confused understanding. Line to quote: "I lost track of my thoughts".