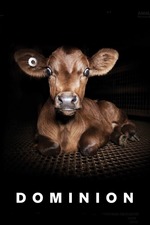 I’ve seen a lot of fucked up shit on the internet. Really horrific stuff, like Chinese workers being haplessly sucked into roller grinding machines that turn their bodies into gelatinous rag dolls. I’ve seen a Brazilian youth have his throat slit while he was still alive. I’ve seen a baby bisected by a slow-moving subway train once. I’ve seen ISIS executions and footage of 9/11 victims exploding in the streets after jumping from the towers. I’ve seen pictures of Emmett Till’s body and Holocaust victims. Some of those things I’ve seen for legitimate educational purposes, others I’ve seen out of “morbid curiosity,” or maybe some strange desire to value my life after witnessing others’ lives taken so quickly and brutally. I’ll always remember those images.

DOMINION is the single most harrowing 2 hours of my life so far. I’m going to be 100% honest: if you have no qualms with eating meat, you’ve never really considered the farming industry, and you have an inkling of empathy in you, don’t watch this. Or, rather, do, and make a lifestyle change. I’ve been considering making the switch to veganism for a few months now, mostly spurred on by a semester-long project concerning animal sentience/non-human personhood, and DOMINION is basically the last kick in the balls for me to start taking that consideration deadly serious.

To get even more personal (and this doesn’t necessarily pertain to the film, so you can stop reading if you’d like), I’ve spent the last roughly 10 years having my worldview completely changed on a number of things. I grew up learning that the Earth was 6,000 years old, there was a God and afterlife, that America is the greatest country in history, that capitalism is unequivocally a good thing, and that global warming is a scam for the government to take control. I’ve come around to very different conclusions on all of those topics. It makes sense that, after years of me being the guy who takes the spider outside instead of smashing it, I’d come around to taking a hardline stance on animal exploitation too.

I’ve got a lot of rethinking to do. Thank you for reading.