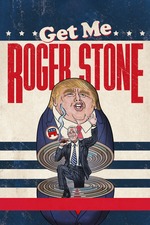 This is reminiscent of Boogie Man: The Lee Atwater Story, and as it turned out both flavors of scum bag Stone and Atwater were partners in a consulting firm. It's pretty impressive how many conservative figures were willing to be candid about Stone in a way that is incredibly unflattering on the whole.

This gives quite a bit of insight to some of the marketing of Trump as a politician from Nixon's resignation speach where he said he has to put America first and step down from the office of president, to Reagan repeatedly saying he was going to "make America great again."

It's pretty disturbing to learn that Stone who was a key figure in the Watergate scandal (and sports a tattoo of Nixon's face on his back, seriously) and Trump's other political mentor Roy Cohn who was cousel to McCarthy for his hearings and the titular McCarthism.

This is an insightful look at emerging American history and we just might see some of the clips used in this documentary as evidence in the near future.