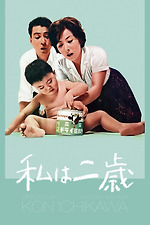 Being Two Isn't Easy is less about the absolutely adorable Taro than it is about his two parents, Goro and Chiyo, and their struggles and successes raising him. The chemistry between the two is phenomenal, and their loving bickering and differing views on how he should be brought up are contrasted with periodic insights from Taro himself in the form of voice overs. As much as it is a family study of Japanese life, the child-rearing philosophies and interactions between the family unit (to eventually include Garo's overbearing yet doting mother) are broad enough that they are not alienating or inaccessible to non-Japanese audiences. Being episodic, the issues Taro and his folks are faced with range from hilarious (a visit to the zoo quick cuts to a symbolic pen of lost children in which the mischievous Taro has inevitably found himself in) to intensely dramatic (children falling from balconies and suffocating in plastic bags).

Technically, director Kon Ichikawa impresses mightily with his delicate use of light and shadow to emphasize Taro's womb-like world that is his parent's small apartment. Ichikawa's skill manages to make the film, made in 1962, feel like it could have been made much later - he resists dating the story by injecting political or cultural touchstones, and the techniques used behind the camera are more reminiscent of the more mature dramatic styles of the 1980s. Contrast that with the score, orchestral and light, which harkens back to the Hollywood romances of the '40s and '50s. Along with the subtle performances by Eiji Funakoshi as Garo and Fujiko Yamamoto as Chiyo, Being Two Isn't Easy feels timeless.

Taro's story is not a new one - family studies are an old standby in both literature and cinema - but Ichikawa's refusal to over-dramatize many of the aspects of child-rearing, along with the clever inclusion of Taro's thoughts on the whole matter, make Being Two Isn't Easy feel like an outlier in the crowd. The skill of all involved, from director to actors, provide a lighthearted yet earnest take on the joy and terror of being a first-time parent. Do yourself a favor and take the hour and a half to check out Being Two Isn't Easy - even if you have no plans to start a family soon, I'm willing to bet you were two once, too.