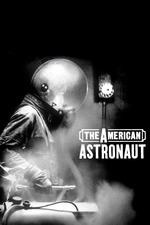 Feeling like the blasphemous love child of Wes Anderson and David Lynch, The American Astronaut is offbeat, campy, and more than a little too quirky for its own good. As a sci-fi/western musical, can it really be any other way?

Written, directed by, starring, and scored by Cory McAbee as the titular Samuel Curtis, The American Astronaut suffers from an incredible first half and a supremely lackluster second. I'm still trying to decide if the novelty of it all can only sustain itself for so long, or if it just loses steam on its own accord. Regardless, what a first half it is. Impromptu dance numbers by swarthy gentlemen, strangely endearing space scenes hand-painted rather than digitally constructed, and one of the most hilarious stand-up routines I have heard in a long time all ultimately doom The American Astronaut to being unable to keep up the frenetic and manically odd pace. There are a few bizarre/humorous scenes later in the film, but unfortunately not enough, and it ends up disappointing instead.

Much as Love was a space-based brainchild of a band (Angels and Airwaves), The American Astronaut is really a project by McAbee's band/experimental art consortium, Billy Nayer Show. Above the fine acting by McAbee and crew, the music is what really shines through here. Sure, the tunes actually sung by the characters are great in a non sequitur kind of way, but the rockabilly score itself is one of the only things to remain consistently impressive through the whole thing.

The American Astronaut is the type of film I would never recommend unless I knew your sense of humor intimately. It is earnest camp, which is a strange and refreshing combination - it understands completely what it is, and celebrates the campiness rather than using it ironically as a joke in and of itself. Besides the incredibly polarizing brand of humor, it's a terribly uneven film. However, the ebullient first forty-five makes up for the disappointment to come, and ending with a song titled "The Girl (with the Vagina Made of Glass)" doesn't hurt.