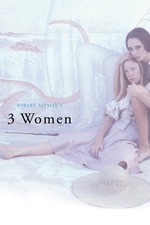 Daughters and mothers, the expropriation of identity and differentiated personas; Altman’s opus can be seen and interpreted a number of ways. 3 Women epitomizes obsession, melding interpersonal embodiment and maternal nurturing. Human vessels—kindred spirits idealizing and eventually personifying those around them—suppressing, but also unleashing those innermost qualities tucked away deep beneath their outward guise. It is a film about dreams and the personalities we adopt within them; the illusory dispositions clashing with distinguished characteristics betwixt three souls.

A richly hypnagogic atmosphere and transient moments of borderline-surrealism give the film a mythic and phantasmal feel. Add to that, the strange and fanciful performances from Spacek and Duvall; it’s a work of uncanny unfamiliarity. No matter how many times I see 3 Women, I’ve a hard time discussing the film, and I think this is due to how wispily layered it is. As mentioned above, there are multiple ways to deconstruct it based on the symbolism Altman lays out for us. Pinky’s behavioral evolution from that of a little girl to a sultrily licentious young woman, paired with Millie’s juxtapositional one from a ditsy and odd deb to a caring and catering mother figure for Pinky does suggest there being multiple characters experiencing a sort of profound self-discovery. However, one could read this as an indication (along with the paintings found all over the pool and other areas) that each person is actually an embodiment of differing aspects of one’s identity. Then, of course, we have Willie; she acts as a looming figure who says little to nothing, but is always there observing and sometimes looking out for Pinky and Millie.

No matter how you look at it, Altman presents us with a psychological disquisition on the human mind that I find often resembles the likes of Persona before it and Mulholland Dr. that would follow years later.

3 Women has a very calming air to it. Many of Altman’s best films have a sauntering quality to them, like wandering through a world that feels comprehensive and unique. This is perhaps most apparent here. The idea for the film came to him in a dream and when I think about my own dreams, they heavily resemble certain elements from this movie; the sound design (I.e. Altman’s ingenious use of faint overlapping dialogue, combined with ethereal score), how virtually every character behaves and the meandering nature of the plot all feel incredibly dreamlike, much more than other films that I and many others have slapped that descriptor onto.

This is one of my all-time favorites, as well as a comfort film that I’ve seen more times than I can recount. It’s a flawless work from one of American cinema’s most consistent and stylistically varying pioneers. And even after having seen it so many times over, I barely have any answers to the questions it poses, which is fine by me; some films do not need to be concretely understood or explained, rather felt and absorbed and this is definitely one of them. Whatever it means to you is what counts, even if you can’t necessarily verbalize the feelings it evokes.