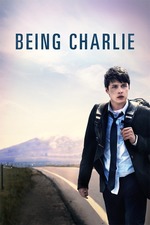 How Shit Went Down On the Set of Being Charlie, probably:

Rob Reiner: Alright, ladies and gents! Let's make it snappy! I'm currently trying to make a comeback, here! I didn't hire that dude from Diary of a Wimpy Kid for nothing!

Nick Robinson: So, Rob, how we gonna do this? Like, how do you want me to portray Charlie in this scene? As a character with a rough exterior and an attitude on him, but he's still got some humanity within his character to make you feel empathetic towards him?

Rob: Hmmmmmm..... Nah, just straight up make him a sex-hungry asshole who wants nothing more than a woman to sleep with and an excuse to mock and rebel against his dad and literally nothing else.

Nick: But...? But that's not how drug-addict characters should be written!

Nick: If a filmmaker even has any semblance of respect for the character in question, they would provide a drug-addict character with different sides to their personalities beyond their surface issues.

Rob: What exactly are you insinuating here?

Nick: I'm insinuating that in your desperate attempt to be famous again, you've ignored the fact that there is more to a character than their problems, and you've painted a character with a real, difficult problem as a complete dick who has no redeemable aspects to his personality and you seem to only want to give the audience exactly one incentive to feel sorry or empathetic for him, which is his barely-elaborated-upon drug addiction. You can't make us relate to characters that have one issue and a shitty attitude that completely negates any desire to stick by their side during any plot conflict.

Nick: I guess there's no reasoning with you. *sigh*

Rob: I guess not! Now before we start this scene, I want somebody to guarantee me that there will be a cheesy-ass song to add a faux-emotional aspect to some of the scenes here! (*rubs hands menacingly*) Finally, I can begin my newest masterpiece!!!!