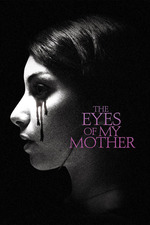 From the get-go, The Eyes of My Mother makes it clear that something is very, very wrong. The eerie black-and-white shades that cascade across the screen, the near-complete lack of a score or soundtrack, and a confusing "Many questions soon to be answered" set-up are introduced just within the first five minutes. Because of this, the atmosphere is immediately set for the film and it is expected for something very dark and very unnerving to unfold before us. Except, this is not at all what happens and we instead get a pretty boring shock-flick that does very little in many categories outside of mood.

I don't necessarily think that this film was a huge failure (far from it, in fact,) but I do think that the overall execution of such a promising premise and such a promising attitude and visual palette was severely empty in terms of what it should've brought to the table. It starts off on a high-note in how it seems to hint at a dark origin story that covers the birth of a true monster, but the way the narrative drags and moans along is off-putting as well as killing for the actual engagement and enjoyment of the final product. For most of the run-time, The Eyes of My Mother follows a simple plot development of "Meet-Somebody-Take-Them-Home-And-Either-Kill-or-Enslave-Them," which mostly doesn't work considering that the film does very little to put some spice or real action into the mix. It's honestly more of a chore to watch the blow-by-blow, step-by-step order of events, and it's heavily worsened when nothing new is even done to make it more impressive or gripping.

Really, the killing blow for My Mother---the absolute biggest flaw that crushes everything that this film was probably hoping to do or say---is this: it doesn't engage. It doesn't entertain. It does not thrill, and it does not scare, and it does not shock. Middle to finish (when you can aim your focus beyond the gorgeous imagery,) this film basically crawls on its last bit of energy; choking on its lack of flair and absence of a truly interesting protagonist or thematic depth. If you want an experiment in mood and visual imagery, The Eyes of My Mother is perfect for such a thing. If you're looking for something else even remotely differently, I wish good luck to you. C+