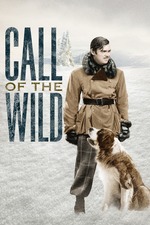 The gold rush with Clark Gable, Loretta Young, and Jack Oakie as the third wheel. Oh, and Buck the dog as the forth. And Buck steals this show! He brings the emotion and the sweet moments. Okay, maybe some of that came from the scenes with Gable & Young too, but I still proclaim Buck the MVP of the four. Oakie was naturally the comic relief and had his moments. But none of them could match Reginald Owen as the thick-glassed dog-hating maniac gold-hunter crashing their party! A true movie heel!

Yet, with the positives, this was a very uneven story with production values to match. Too studio bound and lacked the real good highlights to become memorable. Even with what happened, they could have easily gotten more out of those scenes, because they didn't leave a very lasting impression.

This movie is probable most famous for creating one of the most infamous Hollywood bastards. Judy Lewis. She was conceived during a short romance between Clark Gable and Loretta Young while making this film and because of morals and studio contracts her origins was kept a secret with Young "adopting" her as the explanation, while Gable never acknowledged her.

Devil Dogs of the Air