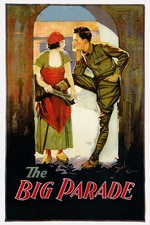 Oh I am so in awe of this beautiful movie!! I absolutely loved the central pair. Renee Adoree was doe-eyed and soulful, and John Gilbert totally made me swoon, even when he was wearing a little too much lipstick. Gilbert stars as Jim Apperson, who joins the Army on a whim just as the US has entered into World War I (of course, this is referred to as The Great War in the picture, since it came out in 1925, which hadn't occurred to me). His two Army pals, Bull and Slim, are hilarious and made me hoot plenty of times. They are introduced in the very first shots, and they really are some amazing shots, especially Slim's perch on the steel rafter of a skyscraper.
Speaking of amazing shots, this movie is absolutely full of them. The framing of both sets and outdoor locations feels so perfect, whether the camera lingers on tire ruts in front of an old cathedral or Adoree's crumpled form in the center of a wide, dusty road. The film uses tints, mainly to denote setting and time of day, and there is one striking use of dye-transfer coloration on an ambulance that's stuck on the battlefield.
Aside from the physical beauty of this movie, the urgency and relatability of its story and characters really amazed me. Vidor paints war in a stunning but unflinching light. The battle scenes are brutal and heartbreaking, especially once Jim does finally come face to face with his enemy. He also approaches the traumatic aftereffects of war with more candor than most modern filmmakers. When Jim, Slim, and Bull share a brick of chewing tobacco at the bottom of a shell crater, I found myself wondering how he would ever relate to anyone after this, this completely intimate act of sharing. As the consequences of the battle play out, my heart really broke for him.
I have never been a big fan of war movies. I can acknowledge the great ones, I tend to enjoy the ones, like Apocalypse Now, that break the mold. But this plays most of the beats that became ubiquitous in the traditional warm film, and I was surprised to find myself responding so instinctively to all of them. Maybe it's the closeness of the war when this movie was made, or the poignancy of the acting, or the mastery of image, but everything about this moved me, and it performed that most wonderful trick of cinema: to bring us together across country, class, and even time.