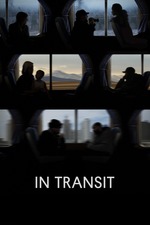 Goodbyes and hellos at train stations are easily my fondest (and less and less seen) movie cliché, the sort of emotional transitory space we can immediately understand, where all types of relationships can be renewed, ended, or suspended in an indefinite future. It’s an inherently cinematic setting: motion, steam, the hum of machinery around us as a view whizzes past and the clock relaxes its grasp. But In Transit is bracing in its devotion—also to its subject and to the non-stationary setting—to explore the internal and deeply personal space within the passengers aboard an actual train, souls at calm and minds observant of the drama shaping their lives that they're either leaving behind or on their way to face. This is a film denying everyone's climax, whether it be a welcoming embrace or tearful wave from a window, and it exists wholly within a contemplative vessel where a perpetual convoy's confessions seem to coalesce into a spirit for a speeding giant. Back and forth it goes, each stop enhancing its dimensions as if it’s guided by those unmistakable golden arches shining like a lighthouse high above the twinkle of small towns. The Empire Builder is still North America’s most frequented and longest east-to-west passenger train, stretching from the Pacific Northwest to Chicago. It’s a three-day journey that collects a true sample of working-class America, engaging with people of all ages, backgrounds, and races. They chat and laugh as their kids trade action figures, drink heartily and play card games, or sit in sleepy solitude, headphones in and mobile devices against the pitch black that swallows up the railroad ahead. Documentary titan Albert Maysles couldn’t have found a more suitable subject for his swan song, one that's also a bittersweet microcosm of his life’s work. His films have always searched for the odds and the ends, people on the fringe who must forge their own path across this wild landscape. And here it all is, along one set of tracks: the jutting shifts from beach towns to mountains to the vast plains, and the single mother of four sitting next to the old woman en route to the children she gave up for adoption decades ago. The middle-aged Native American man at a momentous crossroads with his partner and the young North Dakota oil worker drunkenly confessing his love to the girl with whom he hopes he'll spend the rest of his life. These are the stories of the everyday, exalted into a stunning portrait of our nation’s more benevolent capacities to coexist. But what’s most revealing is the common sentiment that this train offers the chance to truly be who they are, a place where they’re left to answer only to themselves and take this time in repose to sort out whatever they need to. Nowadays we travel primarily by the convenience and bustle of an airplane, a mode that doesn’t encourage this kind of openness to the people around you, or even with oneself. Maysles was always reminding us of the overlooked right up to the end, and the truths he reacquaints us to are both wonderful and comforting.