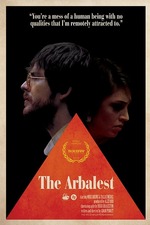 In 1968, inventor Foster Kalt (Mike Brune) presented at the biggest toy convention in the world and became one of the richest men alive from “The Kalt Cube.” Ten years later, an investigative journalist and her crew join Foster at his isolated home in the woods for his first interview in four years and the unveiling of his new invention. But Foster wanders away, still wearing his lapel mic, and begins spinning the tale of how the mysterious Sylvia (Tallie Medel) has figured into his life. The Arbalest is the debut feature from Adam Pinney, who worked as cinematographer and editor on the horror/comedy Blood Car (a cult classic in waiting) as well as shooting Joe Swanberg’s 24 Exposures and the Adult Swim short “Too Many Cooks.”

While those previous titles may give a rough idea of where Pinney’s film lands, it’s even more perplexing than they might suggest. Mike Brune, star of Blood Car, is very funny as Kalt, but the show really belongs to Tallie Medel as Sylvia. She’s hilarious and compelling, giving the film yet another unexpected facet in her deadpan performance as a woman whose apathy towards Foster is nearly matched by his dangerous obsession with her. The film looks gorgeous, and the period design and costuming are excellent, as is the appropriately dreamy score. It’s a wildly absurdist take on Citizen Kane that is utterly unlike anything else out there.