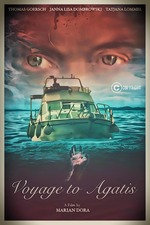 Rafael (Thomas Goersch) and his wife Isabell (Tatjana Müller) are a bored, rich couple traveling together in their yacht, and on one of their stops they pick up young Lisa (J. Lisa Dombrowsky). What at first seems like a simple but creepy invitation for Rafael to make his cold, standoffish wife jealous turns into something else entirely. Shot in only three days on low-grade digital video, "Voyage to Agatis" is an unsettling and deeply unpleasant film from Marian Dora, a director who has made quite an impact on extreme independent horror with only three features ("Cannibal," "The Angels' Melancholia," and this one). The climax of the film is incredibly graphic, and all but the strongest of stomach are advised to stay away. Despite the cheap cameras, "Voyage to Agatis" sidesteps accusations of being pure exploitation through moments of quiet beauty, and by using the quirks of the format to its advantage, including a pre-credits sequence that is physically difficult to watch due to what seems like a video encoding error (it comes and goes intentionally throughout the film). In many ways, this feels like a no-budget answer to the likes of Lars von Trier and Michael Haneke. I'm giving the film an arbitrary rating of 3/5 because while I admire its craft (and the fact that it was shot in just 3 days, which is truly incredible), it is an extremely bleak film that I doubt I will revisit any time soon, if ever.