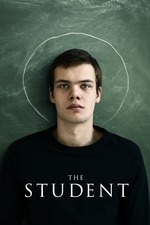 Director Kirill Serebrennikov’s film The Student is a bitterly dark movie, one which shows the slow corruption of a society, primarily in this case through religion, but also through any number of prejudices and causes. The film is a deeply visceral look at hate, zealotry, and human callousness, told through the story of a Russian high school student who begins to quote from the Bible and espouse a vitriolic form of Christianity. The Student is exhausting, and to a certain extent feels almost unnecessarily brutal, but one senses a political urgency in this film as well, an urgency which positions the authority (the principal’s office is adorned with symbols of the Russian state, including a Stalin-esque photograph of Vladimir Putin hanging above the door) as complicit in fanning the flames of hate for its own ends. The film’s unfolds often in a series of breathlessly long takes, with its handheld camera bringing us close to the volatile characters. In an inspired move, the film also inserts citations every time a character quotes from the Bible, a tasteful, austere bit of text fading in every now and then which heightens the brutal irony of the scenes, particularly when the main character expresses his radical Old-Testament hatefulness.

I don’t know how to reckon with films such as this. On one hand, it is incredibly engaging, and it is hard to deny the exquisite mastery of craft in its flowing long shots, dystopic cinematography, or committed performances. On the other, it is deeply uncomfortable to watch, and not necessarily nuanced in its handling of these themes. But then again, perhaps that is what is needed nowadays. I give this film a high rating, but with the caveat that I don’t know if I could handle it again.