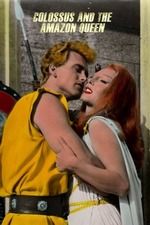 Colossus and the Amazon Queen

I hate to say it but I believe Glauco has really done it this time. Zeus took away his wits already and now Glauco had the nerve to show up in this terrible "comedy". I don't think Zeus is amused with this film and neither am I.

It is so bad that I had to hurry up and skim through it just to find out if it was going to get at least a little bit better but it did not. This might have been funny in 1960, but I found zero humor at all.

This is an unfunny "comedy". I doubt if I ever try watching this mess again. At least there are 3 other movies on the same disc.

The Giant of Marathon