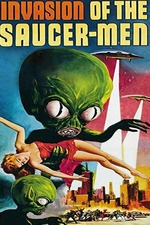 I might be in the minority with liking this film - but I do. This is a film I thought I had seen before until I watched it recently and I have to it was the first time I remember seeing it. I fell in-love with it quickly - had a blast watching it. It's a 1950s COMEDY sci-fi horror and a fun one at that.

A couple of teens are driving down the road one evening and accidentally run over what they thought was a child at first but when they got out of the car to check it was an alien. What's really horrible there is a government cover up via the air force. Can the teens prove a UFO cover-up? Will anyone else believe them and help them? It's a fun watch to find out.

This is my style of little green aliens film - fun to see the aliens and a neat little story. Enjoyable.

Curse of the Swamp Creature