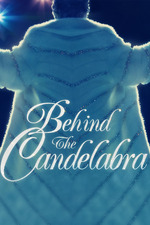 Scott Thorson has been riding on the sixteen foot, sequin and rhinestone littered, white llama fur coattails of Liberace for quite some time now...hasn't he?

I really don't understand why this was made into a movie; I understand the reasoning behind writing the book - because Thorson needs money, but why adapt this book. Why adapt a personal life of a man that wanted to keep that life personal. You cannot stop the book for being written, but you can sure as hell refuse to adapt it.

I really see no reason for this film to exist. These are private, intimate moments from a man's life, a man that did not want to share those moments with the public. I thought it was more about Librace's life and career, but it turns out it's mostly about his stormy relationship with Thorson. Alas, I did watch it though so I'm to blame as well.

The film features some fairly strong performances throughout, of course there is Michael Douglas as Liberace and Matt Damon as Scott Thorson, but Rob Lowe as Dr. Startz had to be the standout. Even though he was essentially channeling Chris Traeger through the distorted face of a face-lift addict. I kept waiting for him to say "Literally" or call Damon "Scott Thorson!"

One question though: Did Baby Boy, the white eyed poodle, get better? Honestly, Soderbergh you introduce a plot point and then never come back to it? Come on I thought you were a professional.