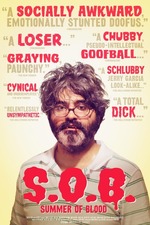 Writer/director/editor/producer Onur Tukel plays Erik Sparrow, a guy that happens to have things he shouldn't, a girlfriend and a nice job which he hasn't maintained for quite some time, but yet...here he is. If one is able to get past Tukel's character's shortcomings (namely his selfishness, his abject indolent disposition, his constant complaining, his need to incessantly over-expound trivial matters), there is plenty to like in this hipster-mocking, NYC vampire tale.

Erik Sparrow was already a vampire, a vampire in the sense that he sucked the life out of every single life event with his constant prattling, devouring pranic energy at every opportunity. Then, he comes a real-life vampire after being attacked in a Bushwick alleyway , not really attacked per se, more like acquiesces into the lifestyle because it will alleviate his adult responsibilities.

Guess what...becoming a bloodthirsty vampire makes him a better person, at least sexually.

The humor starts to slowly descend in quality towards the end, when Erik realizes he wants his ex-girlfriend back, but Tukel keeps it relatively fresh by extending Erik's commitment issues into the immortality awarded from jugular-gulping (he laps up that blood as if it's dispensed from a poorly-functioning water fountain).

Sidenote: At the beginning Erik's girlfriend proposes marriage (which he quickly declines) which sets off this chain of events which leads me to two observations:
1) 98% of the time if he hasn't asked yet, that means he doesn't want to.
2) 2% of the time, he's for it but he just keeps forgetting...so remind him.