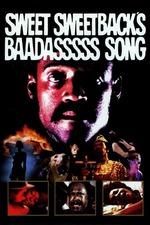 Well, let's start with the positives, such as, Sweet Sweetback's Baadasssss Song's place in history, both cinema as a whole and of course it's importance in black cinema. It supposedly led to the creation of the blaxploitation genre (win...i guess). It did, however, provide a blueprint/inspiration for fellow black directors - showing them that it is possible to direct, produce, act, compose, edit (everything really) a film, even a profitable film - all without the help of the studio system. Also, gave Earth, Wind & Fire their start.

Now to the negatives - which is almost everything; let's face it, as a film, this is essentially an unwatchable mess...or at least a so bad it's good type deal. As long as you can get by the incessant horns/organ song that plays throughout (I swear if I hear that song again!).

It's really just Sweetback running for 70 some minutes, albeit in a velour jumpsuit, complete with pirate short. Just running, and running with that DAMN! horn/organ song over and over again. This running is framed from every possible angles, plus angles I didn't even know existed in reality.

Not getting the point? - Van Peebles asks - bam! - superimpose whited-out legs in a running motion! over top of Sweetback...running! Sweetback is running!

There are some actual positives, film-wise - the scene involving Sweetback beating the cops unconscious with handcuffs - top-shelf directing in that short instance. Also, cop car aflame, some of the more experimental shots (i.e. oil rigs), and the great overhead shot of Sweetback running (get the fuck outta here? he's running?) down the Los Angeles River (just throwing the word river around loosely are we not). And, of course, the opening and end credits.

Ohhhh...and the fact that Beetle (Simon Chuckster) is the greatest character I've ever seen on film. The entire scene involving him jumping out of the shower and constantly feeling the need to comment on the fact that Sweetback looking good, then taking a shit, and of course a bunch of other dialogue that was completely indecipherable except for "Beetle your man! Ya dig!"

History has been kind to you Mr. Van Peebles...quite kind.