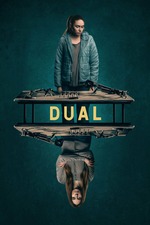 Y’all. This is the highlight of my year. I’m late to reviewing this because I needed some time to process it all and I still haven’t but here we are anyways.

Dual continues the deadpan satirical humor that was so prevalent in The Art of Self Defense(which is still my favourite movie of all time), but this time with a sci-fi spin. Karen Gillan fits perfectly into this style(twice!!), delivering multiple lengthy bouts of laughter but also genuine emotion. And that’s what characterizes much of Dual. It’s absolutely hilarious at times, but is significantly more melancholy than Stearns’ previous work.

Outside of the performance style, Stearns flexes his directing ability to a greater extent, playing with angles and blocking in a manner that never fails to sustain visual intrigue. His visual style again is reminiscent of Lanthimos, although he takes much less time with his shots and tends to favor lower angles from what I can perceive(I’m not saying this is good or bad, just that it’s not like they have identical styles).

As far as the story itself is concerned, I don’t want to go into it too much because I think this would best be enjoyed blind, but it’s simply fantastic. I hate to make another Lanthimos connection, but the high concept premise that plays with the foundation of human relationships is an idea that feels straight out of one of his films. The ending is handled perfectly, lending itself to Stearns’ deadpan delivery almost innately. It’s a world that I can just feel come alive, and I cannot wait to have a chance to dive into it again-hopefully in theaters.

Finally, this has little to do with the actual film, but gosh it was so amazing to be in on the Q&A afterwards. It was immediately clear that Riley and the cast had the best time creating this, and getting to hear what they all had to say about the background made me happy beyond words. It sounds cheesy(particularly considering that this was entirely virtual), but having just that kind of almost-connection with the creative team just revitalized my own creative spirit so much and I’m legitimately grateful for that.

Oh and I know this is one of my longer reviews already but I wanna say that dance sequence might be my favourite scene of the year and it’s January. Book it.