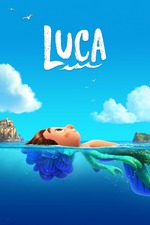 The voice acting is just as solid as it always seems to be, with the standout being Jacob Tremblay in the titular role. Maya Rudolph seems to be in a ton of animated movies now, and while I do like her, it’s starting to get to the point where all I hear is Maya Rudolph, not the actual character she’s playing.

This might be a bit of a hot take(or maybe it’s not), but I thought the animation was pretty mediocre for Pixar standards. It’s nothing bad, but the days where I would be taken aback by new techniques and inventive imagery is gone. Also, it looks like that one grub hub commercial-which can’t be a good thing. But, it’s still fine overall.

The story is just as feel-good as you would expect from Pixar, and while it doesn’t pack the same emotional punch that some of their outings have had, it’s still a joy to watch. The characters are easy to root for, and there are some nice universal themes about facing your fears and acceptance.

While it’s not anything groundbreaking, and possibly fated to be forgotten among the stronger Pixar films, Luca is still a great summer film that’s enjoyable for all ages. The Pixar formula is in full view here, and still works like a charm. Go watch it!