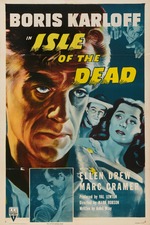 Atmospheric Val Lewton produced film set on a Greek island during the first Balkan War in 1912 that's a burial ground of crypts, graves, and tombs with a few inhabitants and some travelers. That's a pretty unusual setting. It was a long and arduous overland journey to get to Greece at that time, and the film captures that feeling of isolation, mystery, adventure, and danger. There's a mix of mythology, superstition, and dread over a plague that is killing off the characters, or, it leaves you to wonder if it actually is because death in this film is not well defined. An ancient Greek legend of a vorvolaka or vampiric spirit that perhaps possesses Ellen Drew is pretty cool. Some outstanding wardrobe choices goes along with outstanding scenes with the warm south wind blowing through the trees at night. The film captures a feeling of an omniscient force that guides the action. And it's effortless. It becomes beautiful, dark, mysterious, and finally things start getting scary in a way you'd expect to see in a film produced by Val Lewton.