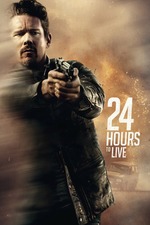 I love this today’s DNA of mainstream action films, mostly the original upcoming titles, getting to be constantly helmed by stuntman professionals, now taking a shot at creating and envisioning their own action with great potentials of stunt achievement convey on the screen to create some escapist gold excitement. At mostly, that’s exactly what Brian Smrz does here in his 24 Hours to Live, when the action hits, it’s a marvel joy to behold, the frames are wide, clean and steady, packing all the ferocity and murdering rampage campiness that a proper 80s and 90s mindless fest would pack it, thrown with a bit of that long take choreography that Chad Stahelski transformed into a mandatory brand since John Wick but decently added through the film and never fully depending on just that and rather constantly makes its attempts to reformulate the action through the story at each new segment.

The part of the problem is that…unfortunately I don’t think the movie has the budget to convey all its ambitious, which shortens the sweet action moments, even with them being the easy highlight of the entire film, even if so far between one another, but turns them all the more special. But the other half of that same problem is that the story is not good enough to sustain the runtime and where the film takes on its kind of bog-down pace that goes to dramatic attempts over the main character of Travis, played by the often ferocious talent of Ethan Hawke that spares all the compliments he deserves, and the extremely clichéd character too deserved more.

Even if the plot is a perfect ludicrousy that gets you to realize how Smrz is getting inspiration from all the years he worked as a stuntman on some of John Woo’s American films like Face Off and Mission Impossible 2, so the nonsensical sci-fi plot of bringing people back from the dead just for 24hrs makes way more sense, and how he’s on trying to make here his very own 90’s American John Woo wanabe prototype. In the action department he gets decently close to homage it, but on trying to balance the cheesiness of the plot with the over-melodramatic nature of the characters clichéd ‘death family-dark past’ trauma while walking in a journey of redemption, just doesn’t work as much as it thinks he does.

But for being trying to achieve and recreate here that level of campiness in all the sectors while trying to convey some heart, usual of Woo’s old expertise, on that, I guess Hawke gets to be a perfect fit on trying to be that central over the top unhinged figure in the likes of Nicolas Cage in Face Off, and Hawke NOWS it how to be a freak on camera, but doses it with some real melodramatic genuineness that shows the level of commitment he always delivers in all his types of roles, here’s no different. And the rest of the supporting cast is all pretty solid and well spread it in their plot reasons to be what they are, but shot-out to old Rutger Hauer that barely had something to do a thing in the movie other than just sit around and act old and drunk, just to in the last minutes having a moment of briefly shining in the action, good perfectly little elemented stuff!

It’s a bit sad that a movie so clearly passionate as this and with real commitment shown all around could and should’ve worked tones better than it actually does, I guess mr. Brian Smrz still needs in try to learn more about making full feature length and cohesive movies. But the little of right that is accomplished here is enough to make it a hugely enjoyable watch from start to finish!