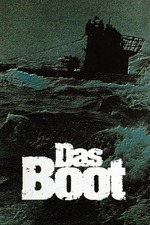 I remember watching pieces of this when I was younger but never all the way through in one sitting. I forgot how angry and effective its antiwar message truly is but was surprised to discover it has almost no trace of Nazi politics. You'd think that after the 70s and strong far-left movement in Germany, the judgment of past generations would find its way into the entertainment industry but here, apart from a couple exceptions, it's ignored. That doesn’t take away from the film in a significant way because Petersen's focus on human resilience and the usual “war is hell everywhere” message is aggressive and skillful, but the absence is interesting to note and does affect the experience considering movies even 30 years prior addressed individual soldier’s dilemmas without shying away from Nazism.

Anyway, Das Boot was even more intense than I remembered. Its characters are next to nothing (which is a good and a bad thing) under the crushing weight of the creaking ship, the sonar beeps, the ominous lighting, the claustrophobic spaces, and the musky smoke that meticulously (and probably accurately) depict life inside the metal monstrosity. Das Boot gives us the reality of war by contrasting two states in a unit’s detail; boredom and interchangeable days are paired with chaos during action. The film shows the weariness of the captain compared to the young crew. It shows the composure and control of a leader and compares it with the physical work of the crew. It shows the men grow tired of one another's habits but also sees them alleviate each other's distress with pictures, music, and memories. The camaraderie among the crew is juxtaposed with the discipline of the captain. It also reminds us that there’s always someone higher up which becomes evident in the Spain scene when the captain and other officers have to listen to people who haven't seen combat feast and babble on and on before they're sent on another suicide mission.

In many ways Das Boot shines because of its detail-oriented approach but many aspects of this film can also be deemed as interchangeable as the crew aboard is according to Nazi leadership. Das Boot's formula is immediately established and aside from the climax at Gibraltar the film doesn’t deviate from it. Obviously that is an extremely fitting choice content-wise but less appealing formally. Characters are portrayed as expendable cargo in favor of highlighting the unit - they're only given personalities by actors like Erwin Leder who would go on to play the killer in Angst a few years later - and as intense as the battle scenes are, the use of shaky cam and shouting after minutes of silence don't offer anything new after the second time.

Luckily the final act is absolutely marvelous. It's insane to think what I would do in a situation like that. You can't forget the men aboard are just normal people. No amount of training can prepare someone for that kind of situation yet somehow they prevail. Nazis or not their escape is emotional because it demonstrates how far human limits can be stretched. But Petersen also takes us beyond the snapping point because war is abnormal, punishing, and inhuman. In the face of it humans are simply other forms of machinery who can sink just as easily as they can rise to the surface.

(Note for myself that this was the 3.5 hour director's cut.)