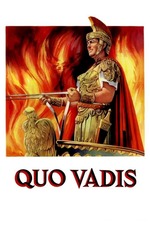 ‘Quo Vadis’ is an epic story about the rise of christianity and ultimately the fall of the Roman empire.
There are a many things to like about this film; first of all, the production design is nothing short of incredible and the cinematography is quite magnificent as well. The few action sequenses we get, are stunningly crafted - even from a “2020 point of view”.
We get good performances by Taylor, Kerr and Genn - I can’t decide if I like Peter Ustinovs performance. On one hand, he owns all the scenes he is in, but on the other hand he ends up feeling a bit too cartoonish (in a “Prince John from Disneys ‘Robin Hood’ sort of way) which is a bit off-putting in the context of this film.