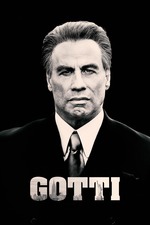 Gottilover5000's body is in the comment section waiting to be buried. (Gottilover is you are reading this please confirm that your body is in the comments) Rather than mourn the fact that we will no longer get gottilover reviews, I want this funeral to celebrate the memories we made, to cherish the fun we've had over the past few months. I watched gotti for the first time yesterday in his honor, and one scene in particular stood out to me. The scene where gotti's son died. If you don't know what happens, one of gotti's kids is hit by a car while riding his bike, gotti kills the guy who did it, but something happened after this scene that inspired me. With tears in my eyes watching Gotti's son die, we cut to a scene Gotti's wife is crying over the death, and Gotti's response to this, Travolta's brilliant acting, Connoly's fantastic writing, something happens that shook me to my very core. Gotti puts some pills in a bag, opens some curtains and says, "That's it, That's it" Basically telling his wife to just get over her son's death. If Gotti had not made this move, he and his wife would never progress the mob life, and just stay mourning forever. Seeing the current state of the lmmacu has been deeply saddening to me. I have seen barely any reviews fly outside of expressing their despair, and I completely understand why. Gottilover not only created an account, he not only inspired gottihater, not only did he create reviews, not only did he create a fanbase, he created an entire community. He created a community of gimmicks, people ironically liking movies, and Gottilover should be proud of what he created. The community he created has been in a state of despair and sadness, and from my interpretation, this is not how he would have wanted it. Gottilover would not want this, GottiHater would not want this, Martin Scorsese, Kevin Connolly, GODDAMN MOTHERFUCKING JOHN TRAVOLTA, would not want this. In ending his account he wanted not for the community he created to end but to improve, to expand. We shall not end but we will become more creative, more confident, and better. Yesterday we mourned over what we lost, Today, We celebrate what we had. We now have an anthem. Amore by pitbull is our calling LONG LIVE GOTTILOVER

And with that I would like to end with a song for gottihater5000, a song from kino masterpiece goodfellas
www.youtube.com/watch?v=9AUEjzVQwKo

If anyone has any closing thoughts about Gottilover, please enter them in the comments. Today we enter a new era, commence forth, lmmacu phase 2!