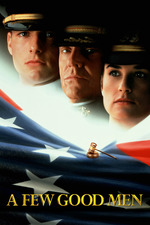 The way this film flows, I feel like Sorkin built something that after a certain point in its creation it just started to write itself. For example, the prosecution presents the case that a 'Code Red' isn't in the Marine's handbook, which leads directly to the mess hall joke. Perfect.

Also, watching this years later, I think Demi Moore gets the shaft as the blame for a lot of the setbacks that Cruise has to overcome. It's more clearly that obvious cliche that she's there to make our hero look good. Although it does lead to one of my favorite lines of all time: "Should we or should we not follow the advice of the galactically stupid?!"

That, plus the gawd awful score, made me drop this a half star.

I really dislike Shaiman's simple addition to this powerhouse film. From the repetitive theme that plays with only a few notes to make sure we're aware of the good news on screen, to the slow bass bombs that drop to let the viewer know that the legal issue that just happened means bad news for our defenders; it's like all the food reality shows took heed and this is the go-to method for their shows today.