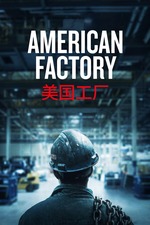 I got to listen to the filmmakers speak about this last night at the Samuel Goldwyn Theater. Their insight on making this film was great. Some highlights:

The plant where they filmed this was huge. After a few days of walking around, filming, and gaining the trust of the various American workers, carrying these huge cameras and tri-pods, they started to get offered rides on the managements golf-carts. So they accepted, not realizing that the workers would see them being carted around. They began to feel like the trust they had built with these workers was for naught. "Oh look, they're with management." So they stopped taking the rides.

They had originally planned to film only the workers' experiences when this new Chinese plant opened, but when they finally got a Mandarin translator and began to hear the Chinese side of things, it opened up the story.

Finally, the name of the doc, American Factory, had two meanings (which is why it's in Mandarin on the title, as well). For our people, it represents an American FACTORY, one where our citizens can go back to work. For the billionaire Chairman Cao, this is his AMERICAN Factory; one of his many around the world.