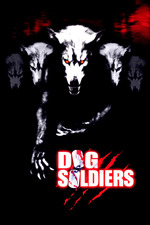 There are way too many films available to watch.

That has to be the only reason for not seeing this exciting, quick-paced, action-horror film until eighteen years after release!! What a maroon I am for not watching this sooner.

The design and size of the wolves, and the skill of Marshall to film them to keep them mysterious and threatening really worked. I think you can tell pretty easily which films influenced the story and the techniques here, with ALIENS being a big one.

"There is no spoon!"