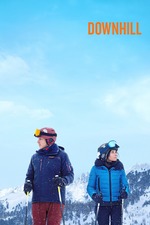 I'm gonna have to NOT check the 'Like' heart for this one, even though near the end it gets a bit more interesting.

First issue with this is that even though the story has humorous bits, it's not a comedy. Hiring Farrell and Louis-Dreyfus to star is the first big mistake. My family, who had not seen Force Majeure, kept waiting for some hilarious bit to occur that would propel the story forward, not realizing that it's a film about a married relationship and its emotional depths, and not some contrived device that we're all gonna laugh at.

Second: I don't know if the avalanche is not frightening in this film because we all know it's coming (thanks again, spoiler-filled trailers). I went back and watched the original's avalanche scene again, and it was DAMN TERRIFYING.

Finally, although the film picks up a bit near its conclusion, as they can address some of the situations, it attempts to resolve the underlying issues that Force Majeure leaves up to you to decide. This one gives a nice "happy" ending (what a surprise for an American remake, sigh) and wraps up with a joke that claims we're all selfish assholes.