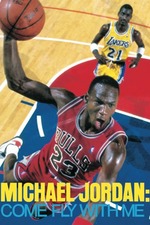 Michael Jordan: Come Fly with Me

My second job (first one was at a theater) was at a video store back in the early 90's. Being an avid basketball player, I used to play in at least four rec leagues a week.

Each night I had a game, if I was at work during the day, I'd throw in Michael Jordan: Come Fly with Me to play on our 12 monitors to get pumped up for my game. I must've watched this video 100 times. Being the same height as Jordan, being able to leap like 2/3's of a Jordan, and having huge hands to hold the ball like Jordan, and I would try to dunk on people like he did on the court. Believe it or not, I succeeded sometimes.

Thanks to The Last Dance, I'm getting a lot of nostalgic feelings for this time period in my life. And so far, this new show is phenomenal, and Jordan will always be the best to ever play the game.