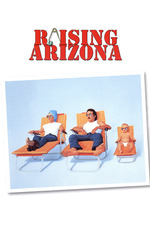 I remember the first time I saw this in '87. I had gone to a sneak preview of Project X, the Matthew Broderick/Military monkey film. Was looking forward to that one, turned out to be a shit.

The sneak was playing with Raising Arizona, which I hadn't really heard of, which was playing first. AND I LOVED IT. How could I not? Then, after the turd of Project X was over, we stayed and watched Raising Arizona again, just to see the Huggies robbery scene a second time, which had killed me. Then we just finished it off for a second viewing.

Some things I noticed this time, and others that make me think:

* Gale and Evelle are "born" when they escape from jail.

* His name is EVELLE. I've always thought it was Neville, a masculine name, but now that I found it was Evelle, it definitely fits with this idea that they are both women's names. What do they represent?

* Speaking of representation: What does Leonard Smalls represent? The dangling, dirty baby shoes... It's definitely more than a bounty hunter.

* Why does Mother Arizona leave the story? Why is the mother not around?

* The friends who have kids they don't care about, specifically want another baby, and also are swingers. They're funny, but there's more to it than just that.

Just my unsubstantiated ramblings about this great film. One thing's for sure: it's never a wonder as to why these filmmakers found the success they've had. They're geniuses.