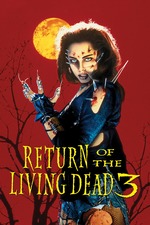 Return of the Living Dead 3

I love RotLD and think it's a perfect horror film. I was jazzed when I heard they were making a sequel, but Part II turned out to be a horrible turd. Return of the Living Dead 3 may not be of the highest quality, but I think that's one of its charms, and one of the reasons I love it.

Melinda Clarke is a champ for what she goes through in this film, and even with the outrageousness of the story, she grounds the film with her torment and sorrow.

This obviously had a small budget, and although it's apparent, you can appreciate how much they did with it. The sets are obviously put together with the goal of using different angles to create a larger space than it is, but the extra effort put into the design really pays off. For example, the big security door that slides down, with a window that shows the barrels of Trioxin inside, was a grand touch.

Finally, there's a reason the first five names listed individually in the end credits are the five Special Effects Makeup artists; the did a phenomenal job. Sure, some effects look haphazard, but the gore is fantastic. Too many zombie effects to praise, so I'll just go back to Melinda. Her transformation into one of the best uses of the zombie mythos, to present the self-mutilation as pain appeasement angle, was represented clearly as a great physical effect and also was relevant to the story.

Finally, credit to Brian Yuzna, champion of some of my favorite horror films of my youth, for directing the shit out of this film.